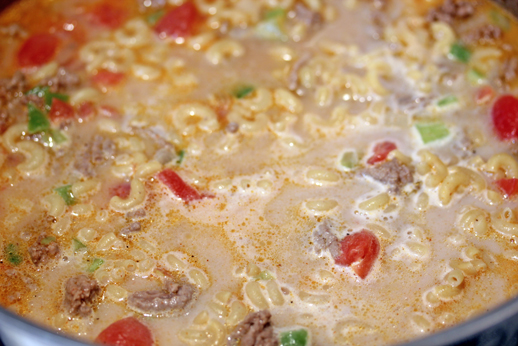 When it comes to one dish dinners, some of my favorites to make are skillet dinners. A 12″ deep skillet makes just the right amount for our family…even leaving leftovers at times.

To get a full meal into the skillet, it requires some meat or chicken, some veggies and some pasta or rice. I usually end up doing pasta because I have so much in my stockpile, and because I prefer to use brown rice when cooking and that just takes to long, especially when I’m in need of a quick skillet dinner!

Most skillet dinners look like this…brown the beef or chicken…add some veggies and pasta, and then add the liquid and the pasta noodles.  Different skillet dinner recipes vary widely on how much pasta to include and then how much liquid is needed.

Here’s how I measure it for quick cooking pastas, regular pastas and whole wheat pastas.

Then cook for 8-10 minutes, covered tightly.  The noodles will soak up the liquid. I also recommend gently stirring the contents of the skillet once or twice…but do so quickly, as you don’t want too much steam and vapor to escape.

If you add too much liquid by accident, remove the lid of the pan and let the water cook off.  And if you don’t add enough, just add some smoking hot water from the tap, about 1/4 cup at a time.

I hope this helps you better understand the method of making skillet dinners…and I hope my measuring tips will make your next pasta skillet dinner perfect!

This entry was posted in How To, Skillet Dinner, Tips and Tricks. Bookmark the permalink.